For almost four months I was trying to get started on my next playwriting project.  It wasn’t that I didn’t have any ideas.  The trouble was finding an idea that I would feel passionate enough about to overcome my inertia.  What was the idea that would keep me away from the TV for hours on end to complete a first draft?

Think, think, think.  That’s what I thought I was doing, anyway.  While listening to the radio or watching TV or driving into work, I would try to think of an answer. 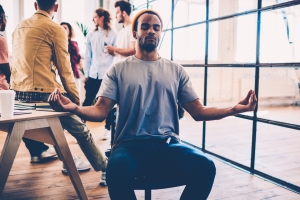 A pang of urgency would hit me when I’d realize that I had to present something to my playwriting group in a few months….

It was almost a week before I supposed to submit my current (non-existent) play to my playwriting group that I remembered some advice from the book Bored and Brilliant by Manoush Zomorodi.  The main thesis of Zomorodi’s book is that we are so busy trying not to be bored that we don’t really get a chance to think.  It’s in the quiet time – the boring time — that our brains like to process thoughts or solve problems.

Most of us are so afraid of boredom that we do anything to avoid it.  Quiet time when you are on your own is usually filled with the radio or TV.  Our phones are filled with apps to keep us occupied so we always keep our mind “busy”.

I had read Zomorodi’s book at the beginning of the year.  As part of the zeal, I removed Facebook from my phone since it was my biggest time eater then.  I also removed Sudoku.  I spent a couple of commutes to work without the radio on.  But as time passed, Sudoku crept back onto my phone.  The radio came back on in the car.  I kept Facebook off my phone, though.

But with only a few days to come up with an idea and get it written, I decided to turn off all audio distractions in the car and let “boredom” do its work.  I wasn’t directly trying to come up with an answer.  I was letting my thoughts wander wherever they wanted to go.

On my second day without the radio on and just being alone with my thoughts, the idea for my next play came to me.  And a first draft was completed just in time to present it to the group.

I’m convinced that making space for ideas to come is important to my creative process.  And making space for ideas means allowing myself to get “bored” from time to time.  I don’t want to give up listening to audiobook or podcasts in my car forever; but I know what to do cultivate some creative answers when I’m looking for them.

Do you make space in your life to get “bored”?