Here I am trying to get this update in before the month ends… As usual. December was a good month for the Genius Project. It was actually my best year of 2015, which is surprising because it was a very busy month with work and family activities. It just goes to show that committing to small steps and following through can work wonders.

Monitoring my distractions really helped also. At the beginning of the month, my time spent on distractions – watching TV, Facebook, Trivia Crack, etc. — was much more than my Genius Project activities. I didn’t stop spending time on the distractions, but I became much more conscious of it and frequently chose not to waste time because I thought of the bar chart that I was going to produce for this report. What gets measured gets managed… 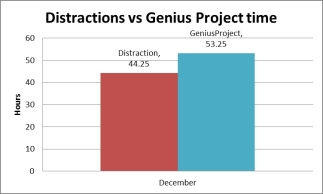 It’s also good to see the time comparison visually because I was wondering how I was going to “find” more time to slowly increase the monthly quota and it is now completely apparent that I have lots of time available for that effort!

Around September, I was despairing a little for this project because from May to August I wasn’t even hitting my minimum time requirement. And let’s face it, if I’m going to get to 10,000 hours, I have to step up the amount of time that I am spending on this work. But the last third of the year rekindled my enthusiasm and optimism for the project.

The key to this effort is taking small, consistent steps forward. For December, I was working on the first draft of a musical and made a commitment of one page a day. It didn’t have to be a good page or a page that would be kept. I just had to write one page. And sometimes it was brutally painful to write even that much. Other times, the writing came very easily and quickly.

It seems to be a continual battle to divorce myself from the process and the product. During the early stages of a draft, I don’t need to worry about how “good” it is. At the early stages, I don’t really know what “it” is yet. But I find that I have to keep reminding myself of that throughout the process, like a mantra. Process over Product. 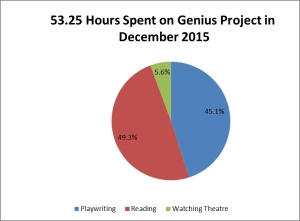 For the month of December, I spent 24 hours writing and 26.25 reading. I saw two shows, both written by friends of mine: A Different Kind of Job by Jessica Anderson and Miracles Don’t Come Cheap by Ryan Sero. Currently, I have completed 965.75 hours on the Genius Project and only have 9,034.25 hours to go! By the end of January, I should have broken the 1,000 hour mark! Whoo hoo!!