Earlier in the year, I was talking to a professional writer when they went on a rant about books on writing. “Writing can’t be taught from a book!” I nodded in agreement, but with a guilty heart. I had a few books on writing at home — I had even read a couple of them. 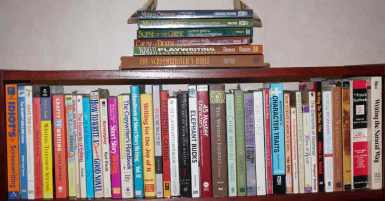 Later, I was astounded to realize that I had over 45 books on writing! And I had read at least a dozen others that I had borrowed or taken out of the library. But did I learn anything from them…?

While I agree that the best way to learn to write is to sit down and write, I also think things can be learned from doing writing exercises or reading about the experiences or routines of other writers.

The first writing advice that I can remember reading was from Ray Bradbury. He suggested that to become a writer, you must write until your word count reaches one million words. After that, you are a writer. This blog post is approximately 500 words, so to reach a million words, I’d have to write 2,000 more posts. Something to think about…

The first book that I bought on writing was probably The Playwright’s Handbook by Frank Pike and Thomas G. Dunn back in 1985. I had taken a class in playwriting at U of T, but I found the exercises in this book to be more straightforward and helpful. In fact, one of the exercises from the book had me come up with the setting for my play Laund-o-mat at the End of the World. Who knew it would take me twenty-two years to get the play finished though?

Another book that I found helpful was How to Write a Movie in 21 Days by Viki King. Yes, the title sounds a bit cheesy, but it did help me write my first screenplay. It took a little more than 21 days, but that was my fault. The point was that I actually wrote a screenplay, which felt like a huge accomplishment.

I have read Stephen King’s On Writing many times and continue to find it inspiring.

Books on writing helped me take some baby steps before I had the guts or the income to take a writing class. A class can encourage you more than a book. Or provide guilt… Or actual deadlines…

But I can assure you that a book is much cheaper than a class!

Ultimately, the best way to become a better writer is to write. A book on writing can give you some of the necessary tools to play around with before you decide that it is something you want to pursue with more vigour.

My only complaint is that I’ve never found a book on writing that exactly meets what I have been looking for at the time. Some people say that means I have to write the book I’m “looking” for.

What books on writing have inspired you?

6 thoughts on “Do Books on Writing Work?”