In July, I will be putting on my first solo Clown Show at the Hamilton Fringe Festival. Gulp. This show is almost fifty years in the making, so I thought I’d reflect back on my Clown influences.

Jerry Lewis was my first Clown. I watched The  Jerry Lewis Show when I was six years old and would watch any of his films that were aired on TV. The funny faces, crazy gestures, and weird vocalizations were unlike anything else I saw from other adults. Maybe it’s the French influence, but to my young mind, he was a genius!

Jerry was followed by Red Skelton, Lucille Ball, and Carol Burnett. My main exposure to the Clowns was TV and I’d soak up any one that could make me laugh.

Later, my father took out some Super 8 films from the library and I discovered Charlie Chaplin, Buster Keaton, and Harold Lloyd. Buster would eventually become my idol and I devoured all his films and biographies. I still have all his silent films on DVD. My son’s name is Keaton. Buster still inspires me with his skill and cleverness.

After investigating the Silent Clowns, I moved on to Laurel & Hardy, W.C. Fields, and The Marx Brothers. The Marx Brothers really resonated with me because they incorporated sophisticated and base humour as well as verbal and physical comedy. They seemed to have something for everyone.

Mump and Smoot (or Smoot and Mump)

In the late eighties, I discovered some actual clowns and watched their performances on stage. Mump and Smoot (Michael Kennard and John Turner) were billed as Clowns of Horror. And they were like a mix of Monty Python and The Holy Grail and some science fiction Circus Clowns. They were unlike anything I had ever seen and were hysterical. Their shows often incorporated audience members and they were masters of improvisation, reacting to each person uniquely. You could watch the same show multiple times and each performance was slightly different.

Kennard and Turner had studied with Richard Pochinko, who had taught me for a few weeks at The National Theatre School. One of my regrets is that I never studied further with Richard. But there are plenty of clowns that trace their lineage to Pochinko besides Mump and Smoot.

Morro and Jasp are another pair of clowns that I admire. Heather Marie Annis (Morro) and Amy Lee (Jasp) play clown sisters and although their shows aren’t as “out there” as Mump and Smoot, they incorporate the audience and use comedy to great effect. Morro and Jasp will be hosting the Red Nose Cabaret on April 20, 2018 which I will be doing a small turn at, so I’m pretty darn excited. 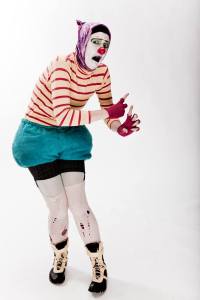 It was at one of Morro and Jasp’s shows that I discovered another clown: Foo. Foo is one of Helen Donnelly’s clown personas (others include Mildred the Maid, Miss Posey, and Dr. Flap). And Foo is one of my favourite clowns ever! Foo’s pomposity and vulnerability are hilarious and crack me up all the time.

When I found out that Helen was putting on a Clown Workshop in Hamilton a few years ago, I signed up right away. It had been decades since I had taken a clown class, but it felt great to play again. Working with Helen and my fellow clowns from class has inspired me to keep clowning around and take the big step of developing a clown piece for the Fringe.

Although not all the people mentioned above wore red noses, they were all clowns that have inspired and continue to inspire me. What clowns have inspired you or made you laugh?