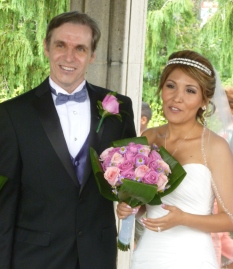 On Saturday (July 20, 2013), my brother Mark married his wife Alexandra in Niagara Falls.  I gave the toast welcoming Alexandra to our family.  Here it is for family and friends that weren’t able to be there:

Congratulations, Alexandra and Mark (or “Marchy”, as he’s known in Spanish).

Before I go on, I thought I’d clear up a couple of things for Alexandra because she’s gotten most of her information about North America from Mark.

Second, believe it or not, there are some people in North America that are as good as Mark or as smart as Mark, in some things.  Now, I don’t know who they are.  I’ve never met them.  But I’ve been told they exist.

Mark taught all his nieces and nephews to call him “Cool Uncle Mark”.  My kids were in their teens before they realized that “cool uncle” was not actually part of his name.

But there is probably one thing that I don’t have to tell you.  There are very few people who love their family as much as Mark does.  For all his intelligence and logic; for all his goofiness and mad organizational skills; Mark is a big softy inside.

He loves his family.  And now you, Alexandra, are his family.  You are the most important person in his life.  And you are a part of our family, just as Mark is a part of your family.

You both understand not only the importance of family, but also how fragile life is.  You’ve both felt the sting of loss when a loved one passes on.   I’m sure Alexandra would have liked her mother to have met Mark, just as Mark would have liked our mother or our brother David to have met Alexandra.  Although our father passed away a year and a half ago, he did meet Alexandra and liked her very much.  He knew she was a “keeper”.

I believe the Spanish word for sister-in-law is “cunada”, but I think I prefer “hermanita”.

Welcome to the family, little sister.